Comments Off on Trackside Newfoundland

Join me for an all-color photographic and descriptive journey across the beautiful island of Newfoundland and experience the last 30 years of Canadian National’s historic railway.  We will ride on the famed CARIBOU, affectionately known to many as the “NEWFIE BULLET.”  You will see stations, equipment and trains from coast to coast, as well as on the branch lines.  The Grand Falls Central and Buchans lines are also included, thanks to my friend, railroader Stan Smaill.

It’s all here, including a detailed history of the Newfoundland Railway from its origins to the last days of Terra Transport’s operation in September 1988.  You will find employee timetables, a freight car synopsis, the story of dieselization, and a unit by unit all-time diesel roster.  Rounding out the coverage we’ll see the ferry connections to Nova Scotia, the Coastal Service, and even the Roadcruiser service.  Over 240 of my images with carefully researched, extended captions explain the many fascinating aspects of this unique and colourful narrow-gauge operation.

My book is available from your favourite Morning Sun dealer or may be purchased directly from me.  I am offering the book at a special price that will include postage and an autographed dedication to the purchaser.  The list price on this book is $69.95 (US).  I am offering it for $65 (US) (excluding postage and handling – contact me).  The Canadian price is $85 (CDN) from me in person.  An additional $12 shipping fee will apply to mail orders within Canada.

Please send your orders to me at bill.linley@gmail.com or text me at 902 309-1451 and I will provide mailing information for your payment. I know you will enjoy this memorable ride through Newfoundland’s railway heritage. 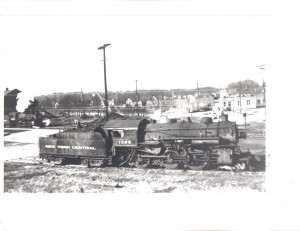 This year Morning Sun Books celebrates its 25th Anniversary of publishing high quality colour books dedicated to the railfan community.  Over the years they have produced more than 435 titles on North American Railways.  To date just twenty of these have sold out and are no longer in print.  One of these is my Canadian Pacific in Color, Volume 1: Eastern Lines which was released in 2003 and sold out in 2008.   I have a couple of copies still available should you want one to accompany a copy of my latest release – Volume 2: Western Lines.

Comments Off on Review of CP2 by William Baird

Review of CP2 by William Baird

From Canadian Railway Observations online magazine, March 2011 edition, editor William Baird writes: “Canadian Pacific in Color, Vol. 2 Western Lines”. I highly recommend this book to my friends. It is a must for any fans of the 1949-1968 CPR Tuscan Red Steam to Diesel-era, including the “CPR Script lettering” period prior to CP RAIL. It is bursting with CPR Steam, Geeps, F-units, C-Liners & FM’s, and of course the western assigned MLW switchers and C-630M’s, most of the images never seen before.

Comments Off on Review of CP2 by Ken Goslett

Review of CP2 by Ken Goslett

Morning Sun books are well known to railway enthusiasts. Their all-colour format of 200 or so photos have made them so popular that new ones appear at the rate of two per month. Among them are some good ones, some duds and a few that are truly exceptional. Bill Linley’s latest effort, “Canadian Pacific In Color Volume 2”, is among the select group of exceptional Morning Sun offerings.

Bill’s previous volume covered CPR steam and diesels in the maroon and gray as far west as the Lakehead. Volume 2 picks up there and continues to the West Coast. And what a ride it is! Nothing is overlooked as the reader travels from the elevators of Fort William to the forests of Vancouver Island. Selkirk steam locomotives share space with CLC diesels and tiger striped Budd cars. Steam fans will be delighted and diesel fans overwhelmed. Photos of freight and passenger cars, and their train consists, will intrigue modelers.

Many railway photo books on Western Canada concentrate on the mountains of British Columbia where the scenery is so spectacular that almost any shot is a good one. The Linley book gives equal coverage to all Western provinces and from the prairies come some of this reviewer’s favorite shots include a stunning pacing shot of G3g Pacific #2380 and an overhead view of Winnipeg Yard entitled “Not steamer in sight”. In the latter shot train #6 departs in 1958 behind a pair of MLW RS-10 diesels while seven other MLW products sit at the shop. The photo might well have been captioned “Not a GMD diesel in sight”. Incredible!

When the book’s coverage does reach the mountains of B.C. the photos are so unique and well chosen that the subjects frequently outshine the scenery. We see the Expo Limited in Revelstoke being pulled by three GP9’s or 2-8-0 #3734 at Brookmere switching log cars. Who would have thought that these images were waiting to be discovered in Canadian photo collections.

Each photo is accompanied by a detailed and authoritative caption that gives insight beyond the obvious. Train numbers and accurate dates are included whenever possible. Knowledge and education go hand-in-hand with the stunning colour images.

But what is most remarkable is the number of photographers who contributed to this collection. Undoubtedly, Bill Linley himself had enough material for a book but chose instead to crisscross the country finding the best from photographers both famous and less well known. Names such as Peter Cox, Bob Sandusky, Stan Smaill, Ken McCutcheon and Omer Lavallee will be familiar. Joining them are Clayton Jones, John Rushton, Keith Anderson, Ron Ritchie, Doug Phillips, Doug Wingfield and many others including this reviewer.

Bill Linley left no stone unturned in preparing this volume. Although the authors of Morning Sun books receive a small stipend for their work, in the case of “Canadian Pacific In Color Volume 2 Western Lines” Bill’s effort far exceeded the financial compensation he received from the publisher. From the exhaustive search for photographs and carefully researched captions to the touching dedication to his late wife Judy, Bill has made this book a labour of love. Thanks for the hard work, Bill. We’re all the better for it.

Comments Off on Review of CP2 by Paul Bown

Review of CP2 by Paul Bown

Quite a few years have passed since the release the eastern lines Volume (which is one of the few Morning Sun books to have sold out) but this latest effort was certainly worth the wait. I do not have enough superlatives to describe the volume. A really fantastic collection of colour photographs of Canadian Pacific operations on their western lines from 1948 thru 1968. There is an abundance of steam views and not a multi-mark to be seen in the diesel photos. This is the era of maroon, grey & imitation gold.

Those items you may have heard about you now get to view in colour. When CPR ordered their FM/CLC H24-66 Train Masters numbers 8901 – 8904 were delivered with full width short hoods that contained steam generators for passenger service. This lasted only a few years and the units were moved back into freight service with the steam generators removed and a narrow short hood applies. I have seen very few shots of the units with the wide hood but there are two scenes in this volume.

I don’t think Bill has left out neither any subdivision nor any type of diesel power as he leads us from Fort William (Thunder Bay) across the prairies, through the Rockies and onto Vancouver Island. He starts the volume with some shots of the CPR steamship service between Port McNicoll and Fort William and concludes with a photo of the S.S. Minto unloading freight at Naskup in the Arrow Lakes Region of British Columbia.

Bill shows us the Baldwin diesels in Vancouver and on Vancouver Island; the FM/CLC units in the Kettle Valley and the western prairies and of course those little CLC DTC side rodded units at various locations.

When the CPR purchased new diesels they often tried them in various locations before deciding where they would be best suited to operate. This was the case with the first order of the MLW C630’s which operated in the Rockies before settling in on the eastern lines of the CPR. There are photos (albeit from the early 1970’s) of these high horsepower units, at least for that era, on Western Line freights.

There were always some operational oddities on railway lines, perhaps caused by a rushed trip through the shop or the efforts of a proud crew. CPR Jubilee 4-4-4 #2911, certainly not a freight engine, is found at Regina in all over black. It is certainly unusual to find an engine of this class not in passenger colours. There is a photo of D10j 4-6-0 #962 in its unique passenger scheme with the maroon patch on the cab and tender as it travels along the Okanagan Subdivision.

The railways last steam locomotive 2-10-4 Selkirk #5935 is caught on the ready track at Field. There is a fantastic pacing shot by Robert Hale of G3g Pacific #2380 en route to Moose Jaw. For a preview there is a similar black & white version in the first chapter of the book “Canadian Steam” by David P Morgan but the colour view in Bill’s volume is unbeatable. Robert Hale is only of the many photographer names that you will recognize as you scan the photos in this book. There is a detailed caption for each of the photos presented.

If you are a CPR fan or just a fan of those transition years between the end of steam and first & second generation diesels you will enjoy the book. It is one of the best volumes I have seen come along in recent.

The book is 128 pages, hard bound and all colour photos. There are also photos of timetables and advertising material from the same period. The book is available from the Society’s Sale Desk Service for $69.95 (US orders in US funds). This price includes shipping and applicable taxes. You may order from the Society at PO Box 47076 Ottawa, Ontario K1B 5P9 or direct from the author: Bill Linley, 652 Port Lorne Road, and RR #1 Port Lorne, Nova Scotia, B0S 1R0.

Paul Bown and the Bytown Railway Society. Their publication is Branchline

No posts by Bill yet.